Yesterday I had the good fortune to be invited to take part in the BT Northern Ireland Young Scientist & Technology Exhibition. I want to thank Dr. Mark Gibson of BTNI for inviting me on behalf of Microsoft to participate.

It took place at the Stormont Building in Belfast and was held in the Long Gallery room. There were 220+ Students and 50+ Teachers from 34 schools taking part along with exhibitions from Microsoft Education (me

), Classroom 2000 (C2k) and Queens University of Belfast through the Institute of Electronics, Communications, and Information Technology ECIT.

The Minister for Education NI, Ms Caitriona Ruane, MLA attended the event and gave the keynote welcome. She met with and spoke to scores of students and teachers on the day. It’s great to see our politicians getting involved and engaged at the grass root level. I think all of those attending were impressed by her knowledge, interest and commitment to students and programmes such as this. Peter Morris from BT, Director of Consumer and Corporate Services was the host and also spoke to the attendees.

I was showcasing the various Microsoft Educational applications that are available on my blog site, along with showing the Project Natal Milo video. I’ve talked about it in a previous post but the more I see it, the more I am awed by the technology that created it. To say the Teachers and students were excited about the possibilities would be an understatement. 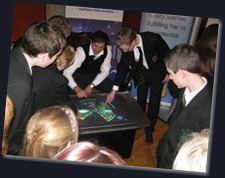 Dr.Rabih Bashroush from ECIT was showcasing the work he has been doing on the Microsoft Surface. Needless to say, he drew quite a crowd throughout the event. Students are generally blown away when they see the Surface for the 1st time and have to try their hand at moving and manipulating the various applications

C2k was showing their new NI Maps which will become an important tool within the Learning NI (LNI) VLE. They are working with the Web Based uLearn group in Plymouth to develop and deploy it.

In additional to all of the activities around this event the new NI STEM (Science, Technology, Engineering and Math) Truck was unveiled publically for the 1st time. I will be doing a future article on it but thought you like to see a few pictures’

Me with the Minister

In its 46th year the BT Young Scientist & Technology Exhibition is much more than a competition; it is an unforgettable experience of a lifetime for the students who take part. The exhibition itself is the final stage in the competition which is open to all second level students from Ireland, both North and South. As well as the 500 student projects on display, there are a further four exhibition halls filled with science and technology based exhibits and entertainment, making it a thrilling event for those who enter and for general visitors too.

In 1963 two UCD physics researchers, Rev. Dr. Tom Burke and Dr. Tony Scott, came across the concept of ‘Science Fairs’’ while conducting research in New Mexico, America. These local school science exhibitions culminated in State Fairs and ultimately a national competition. The pair decided that this type of hands-on science was something that Irish students could benefit from, by taking science outside the four walls of the classroom and showing that it is all around.

And so the BT Young Scientist & Technology Exhibition was born. The first competition was held in 1965 in the Round Room of the Mansion House in Dublin and attracted 230 entries and the first ever winner, John Monaghan, has recently retired as Chief Executive Officer of Avigen, a US Biotech company. The success of the first year was such that the exhibition moved to the much larger venue of the RDS in year two and it has remained there ever since.

In recent years the number of entries has increased dramatically, reaching an all time high last year when 1616 projects were submitted. All entries are screened to select just over 500 projects that go through to compete in the RDS. The event attracts over 37,000 people making it one of the largest events of its kind in Europe, if not the world!

The Ireland finals will be taking place at the RDS in Dublin from January 13th – 16th.

This entry was posted in NI Education. Bookmark the permalink.